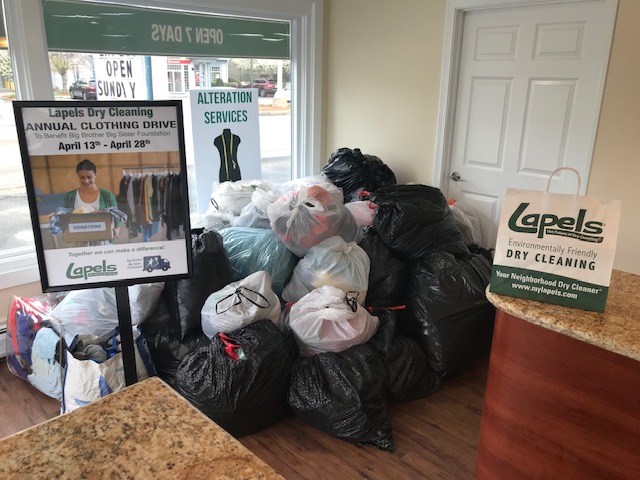 By Lapels CorporateMay 17, 2019No Comments For 16 years, Lapels Dry Cleaning has held an annual clothing drive to benefit the Big Brother Big Sister Foundation. The 2019 drive in the states of Arizona, Connecticut and Massachusetts collected a total of nearly 15,000 pounds of clothing within the Lapels stores.  These donations are then turned into dollars and used to help fund Big Brother Big Sister mentoring programs.

“We really can never say enough about the generosity of our customers and the effort Lapels Dry Cleaning franchise owners put into this drive each year to make it a success. This drive is such a rewarding event in which we really demonstrate the power of being part of the local neighborhoods that we operate in,” said Kevin Dubois, CEO of Lapels Dry Cleaning. “It’s really become a pride thing with our owners and it’s great to see one of our newer franchise owners, Lan Nguyen of Lapels Dry Cleaning of Wilmington on Main Street, collect the most.”  In addition to Wilmington, Nguyen also has Lapels locations in Concord and North Andover.

Added Dubois, “Another thing that made this year’s drive even more impressive is that we had fewer states participating than in years past. That just shows you how much our customers have taken to the drive, especially now that it overlaps Earth Day on April 22. Our customers have made it part of their spring cleaning.”

The clothing collected by Lapels Dry Cleaning and donated to Big Brother Big Sister Foundation is then sold in bulk online, at auctions, at high-end thrift stores, consignment stores and at universities. The net proceeds from these sales go to support Big Brother Big Sister Foundation’s mentoring programs for girls and boys across this year’s participating states of Massachusetts, Connecticut and Arizona. Items typically donated include: men’s, women’s and children’s clothing, coats, jackets, shoes (any season or size). Household items such as linens, sheets, blankets, towels, drapes, comforters, afghans, curtains, fabric and purses were also accepted.

“We can’t thank our franchise owners enough across the country and, of course, our customer base in helping us to give back to the Big Brother Big Sister Foundation and their mentoring agencies,” said Dubois. “Being part of the local communities we serve is a big part of the Lapels difference. This national campaign really gives us an opportunity to make a difference in the lives of the children in the communities we serve.”