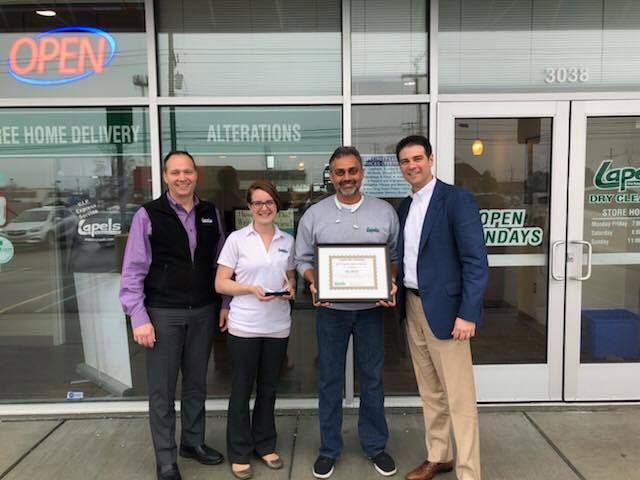 By Lapels CorporateMarch 7, 2018No Comments “Jay is one of the most impressive individuals we have worked with over the course of Lapels Dry Cleaning’s 18-year history,” said Kevin Dubois, CEO of Lapels Dry Cleaning. “Within a few years, he established a network of dry cleaning stores in the metro Detroit area and developed a system for expansion and growth. He’s coupled that effort with several community involvement endeavors. If that wasn’t enough, he’s also the owner of 19 Great Clips hair salons in the greater Detroit metro area.”

“I guess you could say I like to stay busy,” said Desai, who co-owns his Lapels Dry Cleaning locations with a partner from his company, Shambho, LLC.

“One thing I’ve learned during my time as a business owner is you are often only as good as the team you work with. My partner and I have been very fortunate to have a great team led by our operations manager Tiffani Probst, whom I have worked with for 10 years” said Desai. “As for the Franchise Owner of the Year, it’s quite an honor and I do give credit to Tiffani Probst for her amazing leadership and her team. We’ve had a great relationship with Kevin and the Lapels team. Right from the start we had an instant rapport. We genuinely felt like we had a business partner who we would be working with, rather than for.”

For winning Franchise Owner of the Year, Desai received a trophy, plaque and cash award, which was presented by Dubois during a training dinner in Troy, MI on February 15th, 2018.

Lapels has also achieved acclaim in the dry cleaning industry. Lapels Dry Cleaning CEO Kevin Dubois is the co-author of Entrepreneurial Insanity in the Dry Cleaning Business, sold on Amazon.com.